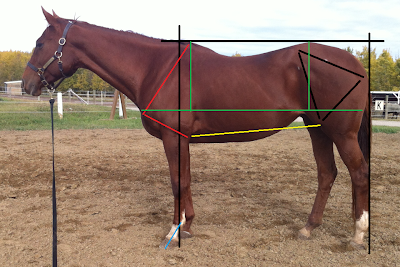 At first glance, Sunny doesn't look like your typical eventer. The first thing you notice is that she is LONG. People are shocked when they find out this little 15.1hh girl rocks a size 80 blanket.

Ideally if you separated a horse into 3 sections, forequarter, back, and hindquarter, a balanced horse would have 3 equal sections. Here you can very easily see with the green lines this is NOT the case with Sunny! Her long back is by far her weakest characteristic. She finds it difficult to really lift her back and step under herself, tracking up under saddle is a challenge, partly because her hind end is just so dang far away from the front!

The LS joint should be placed directly over the point of hip for optimal hind end strength transfer and carrying power, but Sunny's is set slightly to the rear. She is also very wasp waisted, which combined with her long back, makes her have a weak loin coupling, further hindering her drive and power from the rear. It's not a big surprise that dressage is our weakest phase!

Now on to some positives. She has short cannons, flat knees, her legs overall are pretty good. Nice and straight, from both the front and the side. Pasterns are maybe just a tad short but angled nicely. She is standing a bit funky behind in this photo so it's not the best representation of her hind legs. From the point of hip to point of buttock to stifle, those sides of the black triangle are fairly equal, which will allow her to compress her hind end well for jumping. Her stifle is nice and low and placed well away from her body, which gives her scope to clear height as well as width.

Sunny has a large shoulder with a decent slope to it. Her humerus is on the longer side and nicely angled. This is where her killer front end over fences comes from. She has tons of mobility in her front limbs to roll her shoulder blade back and swing those knees up and forward. Her elbow is set well away from her body, which will not limit her front limb mobility.

Despite her level topline, Sunny is built slightly downhill. Her stifle sits slightly higher than her elbow, shown by the yellow line, and while the black line drawn upward through her front end does come out in front of her withers, it still shows a lot of Sunny front end in front of that line, which causes her to travel heavier on the forehand. Her neck is very long which makes it easier for her to use it as a counter balance while jumping, but makes it harder to keep her straight on the flat. Her neck also ties in low which also weights the front end more and will limit her ability to carry her head and neck in a higher level dressage type of collection.

Sunny is far from the perfect specimen, but despite her obvious shortcomings, she does have a lot of good things going for her. I'm sure her huge heart plays a large role in overcoming her weakness as well. I am proud to say that despite her sort of mish mashed looking conformation, she has always been sound and has not yet needed any sort of maintenance.

Variety is definitely the spice of life for Sunny! By far she enjoys jumping the most, but since we can't jump every day, I try to mix things up as much as I can to keep her from getting bored. She seems to enjoy anything new or different, whether it's pole work, hacking out, conditioning work, etc. Even in our flat work I keep things varied and interesting, lots of transitions and different movements and figures, and I like using poles during our flat rides too. Sunny is the kind of horse that can apply herself and has an incredible work ethic, but you HAVE to keep her busy or else she makes her own party!

Sunny very rarely gets an actual bathing, I'm more a fan of just a quick hosing off with plain water after a ride instead. Before a show I'll usually hose her off well and do a quick shampoo of what little white she has on her legs. Show sheen is my go to product for sure. I'll show sheen her tail a couple of days before a show and then just braid it. Then go to the show, unbraid, finger comb, and voila! I'll also show sheen her white leg markings after I shampoo them, that works like a darn for any dirt or poo stains she might get during the show, the markings stay slick so that everything brushes right off.

14. Three best things about your horse

Sunny is ridiculous honest while jumping. If there is any possible way she can get over the fence, she will absolutely do it, even if it's not conventional or pretty. She tries SO HARD for me all the time, even when I'm riding like crap and definitely don't deserve it! I have had horrendous stadium rounds where I wasn't on my game at all and was just burying her so deep to everything, and instead of just stopping like I know so many horses would, she still bailed my ass out, no questions asked. Her heart is absolutely huge, and I think that is what I love the most about her. She definitely trusts me, and would do pretty much anything I asked, and I am so grateful for that, and extremely careful with it as well.

She really steps up to the plate. Nothing phases her. Well, I shouldn't say that exactly, because she *can* get worked up very easily! Simple things like a bunch of canter poles on the ground can really blow her mind sometimes, it's hilarious. But the things you *think* would typically bother a horse, like having a super awkward jump or crashing through a fence, misreading a cross country fence and almost wearing it as a hat, or us just having a unfortunate moment while schooling where I have a nasty fall, those are the times where Sunny really puts on her big girl panties and really rises to the occasion. She doesn't get frazzled or anxious. I can come back around to the same question where we had problems, and she goes right back at it like a tiger, just as determined as I am to nail it and get it right, with no thoughts to whatever happened moments before. She gives me so much confidence that way, she really buckles down when it counts.

She's not malicious. Some people would automatically assume differently seeing her spaz out and bolt and buck under saddle, but none of it she does to get me off or deliberately try to hurt me. That's the difference. I have ridden horses that wait for you to let your guard down and then will let out a huge buck or slam on the brakes at a fence for no reason, or crow hop or rear because they don't want to work. Years ago, as favor to a friend, I was riding their horse who had learned to curl and slowly duck behind the contact, slam on the brakes, drop his shoulder and spin during rides to try get you off. It was definitely a man made habit, and made me angry every time this horse would try it. I was able to break the horse of the habit after a few rides, but as soon as the owner got on, the horse was instantly back to its old ways. One of those situations where I just had to cut my losses, as the owner wasn't willing to change anything in their riding. THAT kind of stuff I can not stand, just your typical spoiled horse stuff. Shenanigans I can deal with, no problem. When a person has caused a problem I'm a less forgiving. With Sunny it's different. Sunny is Sunny and is going to do her thing regardless, whether it's letting out a celebratory buck in the middle of a dressage test or jumping 1.15m like it's 1.30m. If I can't stay with her, that's MY problem, not hers!!

On the ground is another story, as she can definitely put on a mean bitch face and will test people she doesn't know. I know she would never bite *me*, she knows better, but I can't say that she would be the same with someone else.

15. Favorite picture of your horse

This is still one of my favorites, from last summer. Our first double clear prelim and we ROCKED it!! That chevron was huge as well, almost 5 feet with that brush on it. 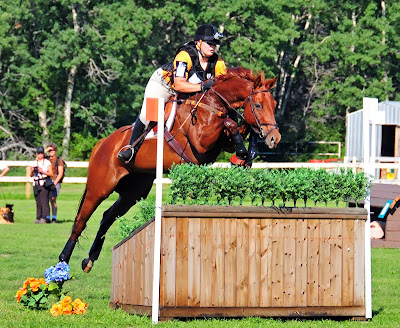